How Unreal Engine is creating new possibilities for the automotive industry

The extraordinary capabilities of Epic Games’ Unreal Engine has had an impact on the automotive industry that continues to grow. Some of the world’s top automakers are turning out a wide array of impressive real-time 3D experiences with it.

They are being built both in the development of vehicles and as sales and marketing tools, including digital showrooms, mixed reality labs, cinematic experiences, and online 3D vehicle configurators streamed to any device. All of these advances culminate to enhance the automotive value chain.

Automakers are leading the way in providing remarkable and immersive e-commerce experiences. They deliver exceptional personalized experiences that can boost conversion rates, reduce customer acquisition costs, and upgrade the status of brands.

How automakers are using Unreal Engine

Automakers including Audi, Chevrolet, Porsche, and Volkswagen have turned to Unreal Engine because it provides the best photo-realistic images available from any real-time 3D rendering and development platform.

Here are just some of the ways automakers are using Unreal Engine’s real-time 3D rendering tools:

The power, high quality, and ease of use make it clear why Unreal Engine is often the choice of automakers as they seek new and innovative ways to design and market their products. Unreal also allows marketers to convert final CADs into digital brochures with photo-realistic images that can be dropped into any location, and video content can be shared to online and social media channels as well.

And for those vehicles that draw interest from popular game franchises, Unreal's technology makes sharing 3D CAD models with them easier. Games created in Unreal Engine that use real car models include "Forza Street," "Gravel," "MotoGP," and more.

Cars and virtual reality experiences are a good pairing because automakers know that these experiences give customers a totally immersive experience that's customizable. In fact, most of the ultra-realistic interactive game content has up to this point been deployed with VR.

Although the virtual reality equipment is a great tool at the dealership, its impact is limited because the overwhelming majority of car buyers start their search from home before stepping onto a showroom floor. VR is not an option for most buyers to use at home because they can't afford the hardware needed to run the technology, including headsets and high-end personal computers. And not everyone is a fan of the bulky VR headsets.

So when Chevrolet launched its online 2020 Corvette Stingray 3D Visualizer, which was also designed with Unreal Engine, it provided a real link to consumers. This real-time photo-realistic 3D configurator can be streamed to laptops, tablets, and other devices. It lets users view the car from any angle, inside and out, as they fully customize their cars, including the wheels, exterior accents, paint color, interior, and accessories.

The car looks hyperreal, and the configurator contains several features for social sharing. And users can view a summary of their configured Corvette with options to preorder the car or get information about the closest dealer.

The excitement over the 2020 Chevy Corvette and configurator drew a big crowd and was a huge win for Chevy. The visualizer was unveiled July 18, 2019, and by the end of the month, 1.3 million users had tried it, logging 152,000 hours in July alone. But the launch wasn't without problems.

Many users who were excited to be the first ones to check out the configurator were disappointed to find that the site locked up because it couldn't handle the volume of visitors. Chevy worked to increase capacity, but several users on the first day had a downgraded experience, and others simply couldn't get on.

This is where automakers need to pay attention and invest in technologies, which can ensure a more reliable, consistent buyer experience. You don't want to get customers excited about a product that ultimately provides a disappointing experience because of lag time or an unpolished 3D experience. Distributing a high-quality, immersive 3D experience at scale is possible with the right cloud rendering technology. And as automakers are learning, these real-time 3D streaming tools greatly enhance conversion rates and lower customer acquisition costs.

Related Read: How to design and deploy a 3D configurator that will wow customers

But you need the right cloud partner — PureWeb — when streaming interactive 3D configurators developed with Unreal Engine. This is especially true for e-commerce and marketing campaigns when scalability and traffic spikes can vary considerably day to day, and even hour to hour. Cloud rendering and real-time streaming technology has improved tremendously in recent years, with high-end GPUs in the cloud now available, and fully managed streaming services to deploy and manage. PureWeb's scalable cloud streaming platform easily integrates into and supports 3D applications created with Unreal, including those created with the latest ray-tracing technology.

Although Unreal Engine has its own Pixel Streaming tool, setting up this streaming protocol on the cloud in order to scale for large numbers of users would require a lot of work to set-up and manage for optimal performance and cost-efficiencies. It is better suited for smaller audiences or one-to-one sharing, whereas PureWeb’s 3D cloud streaming platform was designed for enterprise-level deployments.

To learn more about the impact of game engines on the automotive industry, download our whitepaper "Game Engines in 3D Car Configurators." 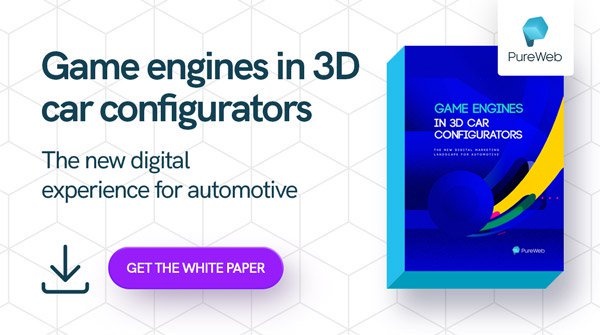 Unleash your Unreal Engine projects and experiences with PureWeb

Be first to sign up for our newsletter coming soon. Receive the latest news, trends, and tips on real-time 3D, cloud streaming, and collaboration.

No spam, we promise! You will only receive essential emails.